We’ve covered ASU 2017-01 in a previous post, but decided to expand on the issue in this post, providing examples and highlighting the current IASB discussions on the topic.

A business is still considered to be an integrated set of activities capable of providing a return, but under the new guidance, to be considered a business, a set needs to have an input and a substantive process that together significantly contribute to the ability to create outputs. The new guidance provides a framework to evaluate when an input and a substantive process are present as well as provide more stringent criteria for sets without outputs to be considered businesses. As a result, fewer transactions are expected to involve acquiring (or selling) a business! ASU 2017-01 is effective for public companies in 2018 and for all other companies in 2019, with early adoption permitted. 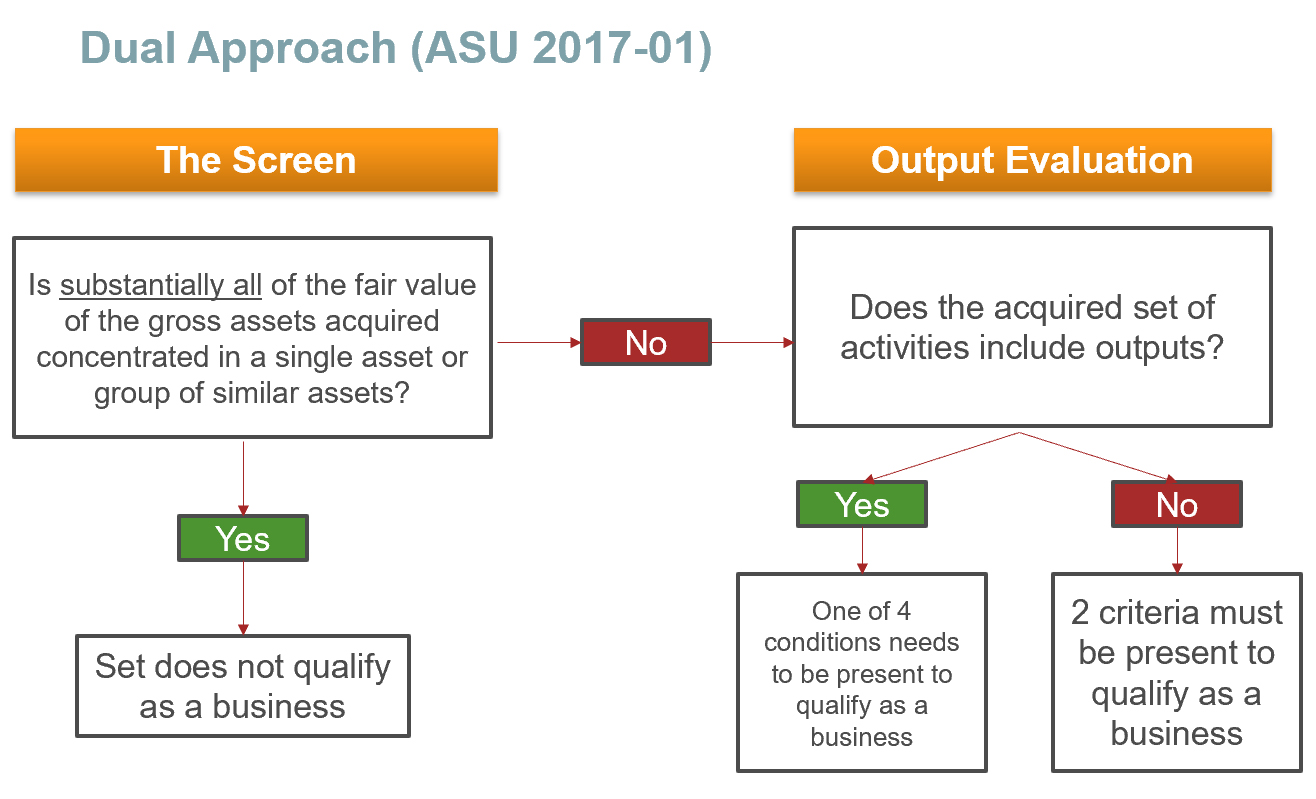 Let’s look at an example:

Lion Co. purchases from Wolverine a legal entity, Buckeye, that contains the rights to a Phase 3 (in the clinical research phase) compound being developed to treat migraines (the in-process research and development project, or the IPR&D project). Included in the IPR&D project is the historical know-how, formula protocols, designs, and procedures expected to be needed to complete the related phase of testing. Buckeye also holds an at-market clinical research organization contract and an at-market clinical manufacturing organization contract. No employees, other assets, or other activities are transferred.

This set would not be a business under the new guidance! When Lion Co. acquired Buckeye, they would conclude that the IPR&D project represents an identifiable intangible asset that would be accounted for as a single asset if acquired in a business combination. Lion Co. can qualitatively conclude that there is no fair value associated with the clinical research organization contract and the clinical manufacturing organization contract as these services are being provided at market rates and could be provided by multiple vendors in the marketplace. Therefore, all the consideration in the transaction will be allocated to the IPR&D project (i.e., substantially all the fair value of the gross assets acquired is concentrated in the single IPR&D intangible asset).

It’s important to note that the guidance does not define “substantially all.” However, this term is used in other areas of GAAP (e.g., revenue, leases) and, while not necessarily a bright line, is typically interpreted to mean approximately 90%.

If substantially all the fair value is not concentrated in a single asset or group of similar outputs, ASU 2017-01 requires a company to determine whether or not the acquired set includes outputs.

If the acquired set includes outputs, the set must meet one of the following four conditions in order to qualify as a business:

If the acquired set does not include outputs, the set must meet both of the following criteria in order to qualify as a business:

Let’s continue with our example.

Let’s say that Lion Co. buys all the outstanding shares of Wolverine. Wolverine’s operations include R&D activities on several drug compounds that it is developing (IPR&D projects). The IPR&D projects are in different phases of the FDA approval process and would treat significantly different diseases (assume that each project has a significant amount of fair value). The set includes senior management and scientists that have the necessary skills, knowledge, or experience to perform R&D activities. In addition, Wolverine has long-lived tangible assets such as a corporate headquarters, a research lab, and lab equipment. Wolverine does not yet have a marketable product and has not generated revenues. We can conclude that the fair value of the acquired gross assets are not substantially concentrated in a single identifiable asset (because let’s be real, we would not be walking through this example if it were).

This acquisition would represent a business!  Because “the Screen” has been passed, Lion must next look at Wolverine’s outputs (Wolverine does not yet have a marketable product and has not generated revenues). Because there are no outputs, Lion must evaluate whether the two criteria are met, (and they have both been met):

The IASB also has clarifying a business on their mind as they recently released more guidance on the definition of a business as it relates to IFRS 3, Business Combinations. These amendments to the guidance provide a narrower definition of a business with an assessment that focuses on the existence of a substantive process (sound familiar?). Additionally, the IASB took “the Screen” concept of ASU 2017-01 and called it the “concentration test” but made this test optional under the revised guidance. These amendments apply to transactions in annual reporting periods beginning on or after January 1, 2020, with early adoption allowed. As always, if you have any questions, especially on IFRS, feel free to contact us!