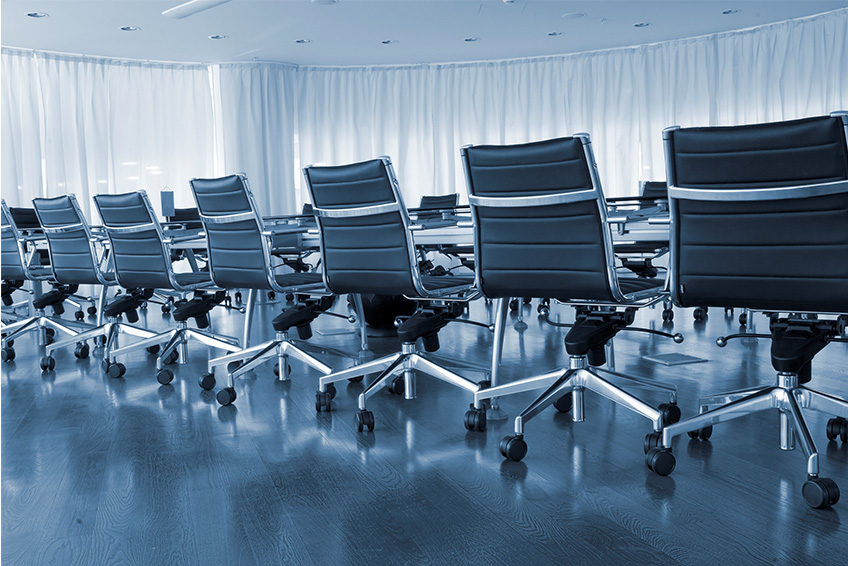 By now, you’ve undoubtedly heard the news: All leases are going on the balance sheet. In fact, if you apply IFRS or if you’re a public business entity applying U.S. GAAP, they should already be on the balance sheet, since the standard was effective beginning January 1, 2019 for calendar year-end companies. Meanwhile, all non-public entities applying U.S. GAAP are breathing a sigh of relief as the FASB has proposed delaying the effective date, buying non-public entities an additional year of preparation time.

As financial statement preparers use this extra time to (hopefully) continue pulling together an inventory of their leases, there is one question that is bound to pop up: “All leases? Really? What about leases of office furniture? Low-value items? Short-term leases?” This post looks to each standard, IFRS 16 and ASC 842, to evaluate the answer.

Let’s use an example to help us illustrate what we’re talking about. Consider the following case facts about Nunes’ Cow Manure Co. 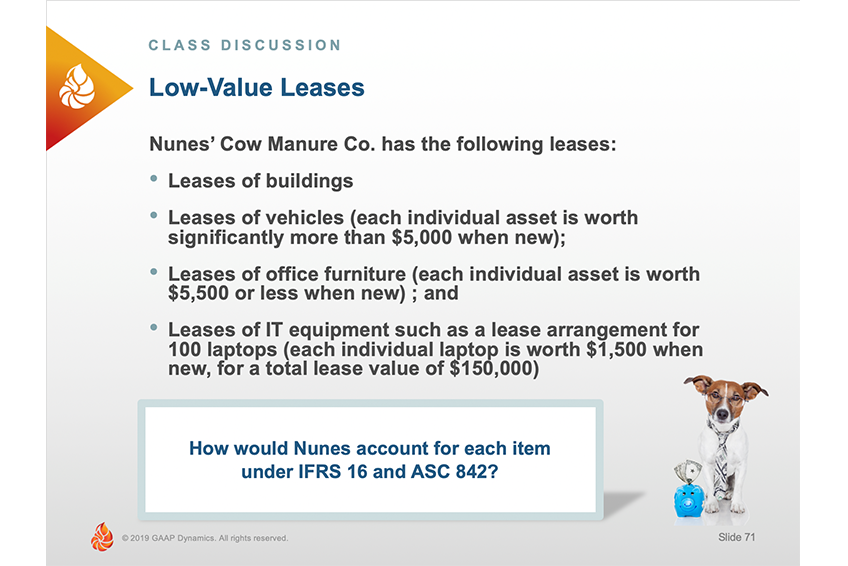 Note: These case facts are based off of the fact pattern discussed by the Canadian Accounting Standards Board’s IFRS Discussion Group, which can be found here. 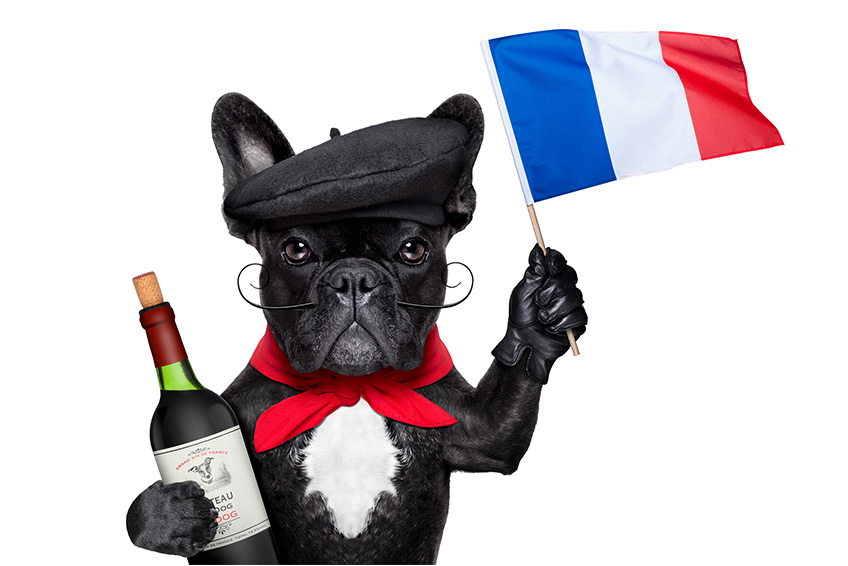 Let’s evaluate this scenario under IFRS 16 first. The guidance in IFRS 16 requires all leases to be recognized on the balance sheet, but it allows for two exemptions:

Both the IASB and the FASB define short-term leases as those whose term is one-year or less. Based on the case facts for Nunes’ Cow Manure Co., there is nothing that would suggest that any of these leases would qualify for the short-term exemption. For more information on determining the lease term, make sure to check out this blog post.

That leads us to the 2nd exemption: low-value leases. IFRS 16 provides lessees with an election not to recognize a right-of-use asset and lease liability for leases for which the underlying asset is of low value. Here are some of the key considerations when determining whether or not a lease qualifies for this exemption:

So, which of the leases mentioned in the case facts can qualify for the exemption? Let’s look at each:

While we don’t know the specifics, I believe it is safe to assume that this would NOT qualify for the low-value lease exemption and, therefore, should be recorded as a right-of-use asset and lease liability on the balance sheet.

Again, because the case facts state that the asset value is clearly above US$5,000 when new, these leases would not qualify for the exemption under IFRS 16.

Here, the answer likely depends on how you interpret the guidance above. Most specifically, how you interpret the IASB’s response in its Basis for Conclusion that states that “low-value” is meant to be assets worth US$5,000 or less. If you conclude this amount is not intended to be a bright-line test, then perhaps the leases of office furniture could be considered low-value and qualify for the exemption. Even if you do interpret the “US$5,000 or less” as a bright-line test, remember, each lease should be evaluated individually. So, those pieces of office furniture whose values are less than US$5,000 could be considered low-value and exempted from recognition.

Leases of IT equipment

For this scenario, it likely depends on how an entity views the “lease-by-lease basis” criterion. The leases for each of these individual laptops was entered into in one arrangement. So, if the entity considers this arrangement as a whole, the value exceeds the US$5,000 threshold, and so recognition of the right-of-use asset and lease liability would be required. However, the entity could also argue that each of those laptops represents an individual lease arrangement and the value is clearly below the US$5,000 threshold, thereby qualifying for the recognition exemption. 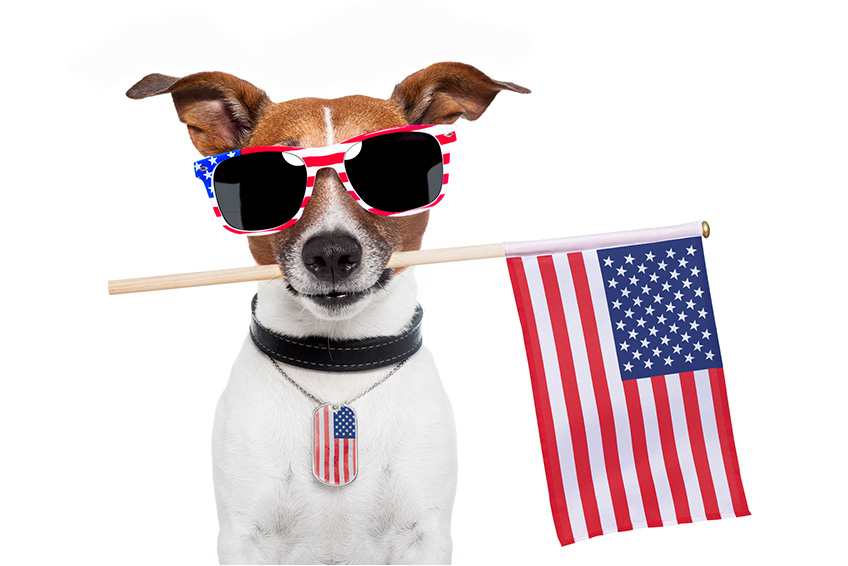 What about ASC 842? Well, unluckily, U.S. GAAP does NOT have the same low-value lease recognition exemption that IFRS 16 contains. In fact, the ONLY exemption provided by U.S. GAAP is for short-term leases.

Therefore, the “correct” answer under U.S. GAAP is that all of these leases would need to be recognized on the balance sheet, regardless of the value of the underlying assets!

However, in practice, we expect that many entities will utilize something similar to their PP&E capitalization policies when determining whether to recognize a lease or not. But BEWARE! This is a non-GAAP policy!  What does that mean? You’ll need to be able to document and prove to your auditors that the right-of-use assets and lease liabilities that you did not recognize are immaterial, individually and in the aggregate, to the financial statements!

Are you still trying to get up to speed on the new leasing standards? Contact us to schedule a Leasing workshop today via live training or a live webinar…but act quick! Our fall schedule is filling up fast!  Looking for an online option? Checkout our newest Leasing eLearning courses, and ask us about group discounts for your team.